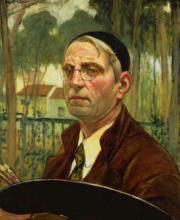 He was born in Florence on the 2nd of December in 1873. He was interested in art since he was a kid. One day, while he was returning home from school, he stopped to curiously observe the artist Telemaco Signorini who was painting with his easel in the "Mercato Vecchio" Square in Florence.
Galileo Chini frequented the art school in Santa Croce, where he attended, with brilliant results, the decoration courses, putting to practice, along with his uncle Dario, the things he was learning about restoration and parietal decoration. He soon also started to work at the "Pegna" chemical products factory.
In 1896 he founded, in Florence, the factory "Arte della Ceramica" (Ceramic Art), trying to take over an old ceramic production plant, together with Vittorio Giunti, Giovanni Vannuzzi and Giovanni Montelatici, who were all aware of the decorative art problems. The idea was born at the "Caffè Nacci"in Piazza Beccaria.
The ceramics of their factory started to obtain a bit of success, appearing in Europe and also in the USA, with a lot of pieces being exhibited at the Tiffany, in New York City. Galileo Chini alternated his activities as decorator to the ones as restorer, leading his uncle's enterprise and using the ceramics to decorate the outside and inside of palaces and shops. A perfect example would be the Margherita cafè in Viareggio, but also other buildings, located in Viale Regina Margherita, which formed the scenography of the Viareggio promenade. In this city, there are a lot of decorative setups consisting of ceramic tiles which you can admire, on various palaces and villas, still today.
He took part in the most prestigious exhibits, both in Italy and abroad. He worked on the restoration and decoration of the paintings of the Santa Maria Maggiore church in Florence; he worked on the frescoes for the Hotel Cavour, also in Florence; he decorated the Grand Hotel La Pace in Montecatini and he also produced various mosaics for the Pathé palace in Milan.
From 1901 to 1910 he gained the role of the most appreciated decorator and he obtained a lot of prestigious commissions who led him to work for an illuminated group of assignors. In 1910 Rama V, king of Siam, who liked the artist's works at the Venice Biennale in 1907, during his second journey in Europe invited Chini to work at the Royal palace in Bangkok. The king declared to have finally found the appropriate artist for the to decorate the  Phra ti Nam, after he saw the "Sala del Sogno". Galileo Chini accepted the prestigious commission and went to Siam, learning the essence of the oriental origins of the Art Noveau.
As painter, Chini depicted still life, beautiful landscapes of the Versilia and various portraits.
He died in Florence on the 23rd of August in 1956.
www.repertoriogalileochini.it