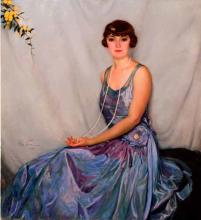 Josefina Racca (Argentina 1892 - Sassari 1989), daughter of Santiago Racca and Francesca Oytana, married Gaspare Arborio Mella di Sant'Elia – (Sassari 1874 – Viareggio 1934) descendant of a family of Piedmontese origins, - in 1910. The husband obtained, in 1927, the title of Baron. From the marriage six children were born: Francesco, Felicita, Rosanna, Renata, Fernanda e Santiago.
Josefina, who attended French and Swiss schools, always had an illuminated mind. She was famous for the care and delight she put in organizing great costume parties.
It was with this spirit that she wanted to set up the ballroom – Mirrors' Room – in Villa Argentina and commissioned to the Sardinian artist Giuseppe Biasi, of who she was the patron, the realization of the pictorial cycle "Persian Marriage" and the decorative setup for the ground floor of the Villa. She traveled a lot, staying in the trending localities and she permanently moved to Viareggio in 1934, after the death of her husband, where he stayed for a lot of years. By the time she was elder she decided to retire in Sassari, where she died in 1989.