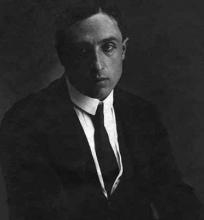 He was a renowned a painter, illustrator and engraver of the twentieth century Italian and European artistic landscape, as well as the most prominent figure of the figurative culture in Sardinia at the start of the century.
In 1909, his breathtaking watercolor "Processione nella Barbagia di Fonni" was selected for the Venice Art Biennale. In 1913 he took part in the first Roman Secession Exhibit, the artistic movement which he then joined in 1914, the year in which he also presented his piece at the Venice event. In 1916 he moved to Milan, where he followed the most refined artistic groups, obtaining a positive consensus. In 1923, in Bellagio, he worked at the creation of the decorative setup for the Villa Serbelloni Hotel bar, property of his friend Arturo Bucher. The environment was adorned with a cycle of big paintings inspired to the theme of love, using bright shades of colors such as yellow and white.
After this period, Biasi found himself in some financial difficulties which also conditioned his creative drive. So, in 1924, he went to North Africa where he stayed until 1927, traveling through Egypt, Tripolitania and Cyrenaica, dedicating himself to the observation of the primitive culture and showing interest into the African art, the tribal myths, the Indian traditions and also to the Primitivism movement, to Matisse and Modigliani. The awareness matured in North Africa brought him to develop a bare and essential expressive language, adopting ample coats of dry and meager color.
When he returned to Italy, in 1928, he was coldly greeted at the Biennale, where he exhibited two big and deeply decorative nudes: "Serenità" and "La teletta".
Josefina Racca and the Baron Gaspare Arborio Mella di Sant'Elia – coming from Sassari, Biasi's native city – commissioned to him the realization of the pictorial cycle for their residence in Viareggio: in 1930 the artist painted the pieces "Matrimonio Persiano", "Suonatrici", and the three panels depicting exotic landscapes, all for the Mirrors' Room of Villa Argentina; in 1940 he finished the decorations of the spaces with the "Ritratto di famiglia" and other images of women on the gallery's doors.