From the gallery you can enter the Mirrors' Room, also known as Ballroom or Celebration Room; the most precious space of the Villa, which perfectly expresses its elegant sophistication.
On the room's main wall there is the big painting “Persian Marriage”, which was part of a triptych made by the painter Giuseppe Biasi in 1930: the piece was commissioned to him by the baroness Josefina Racca Arborio Mella di Sant'Elia, who wanted to create an ideal scenic design for the various dressed-up celebrations she organized at the Villa.
The complete artwork depicted a Persian bridal cortège with the newlyweds carried by two elephants in front of the walls of a city with an oriental landscape on the background: the central painting in which we can admire the groom on the elephant and the tabernacle surrounding the bride is well conserved, while the two lateral panels, depicting the prosecution of the urban walls with a knight on the right and  two figures opening the bridal procession on the left, were lost. With this piece, the artist Giuseppe Biasi reveals a deep knowledge of the pictorial canons of the Asian painting and a meticulous taste in every little customs detail.
The painting is framed with a deep floral twine of golden stuccoes which decor the room's walls and the ceiling, brought to its original splendor during the restoration.
The room's oriental taste is enhanced by other Giuseppe Biasi artworks, such as the “Suonatrici” and the “Exotic Landscapes”, at the center of which we can admire four mirrors with silver frames.
The games of lights and reflexes created inside the room are amplified thanks to the reflections of the Mazy black marble floor (coming, as the original one, from the only active cave in Belgium, in the Golzinne zone) and are enriched by a unique little silver tread iron gate (1939-1940) which safeguards the space.
Today the room hosts special events and, with the agreement of the City of Viareggio, the celebration of marriages and civil unions. 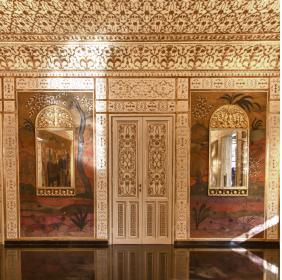 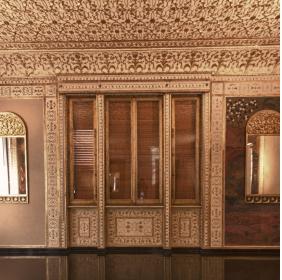 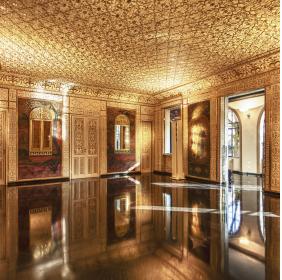 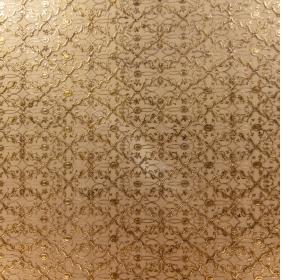 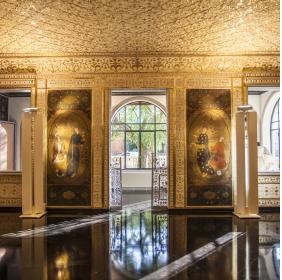 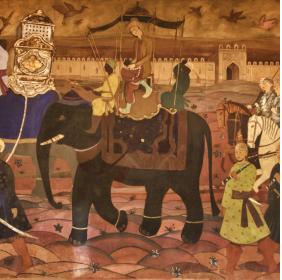 The Spaces and the Rooms